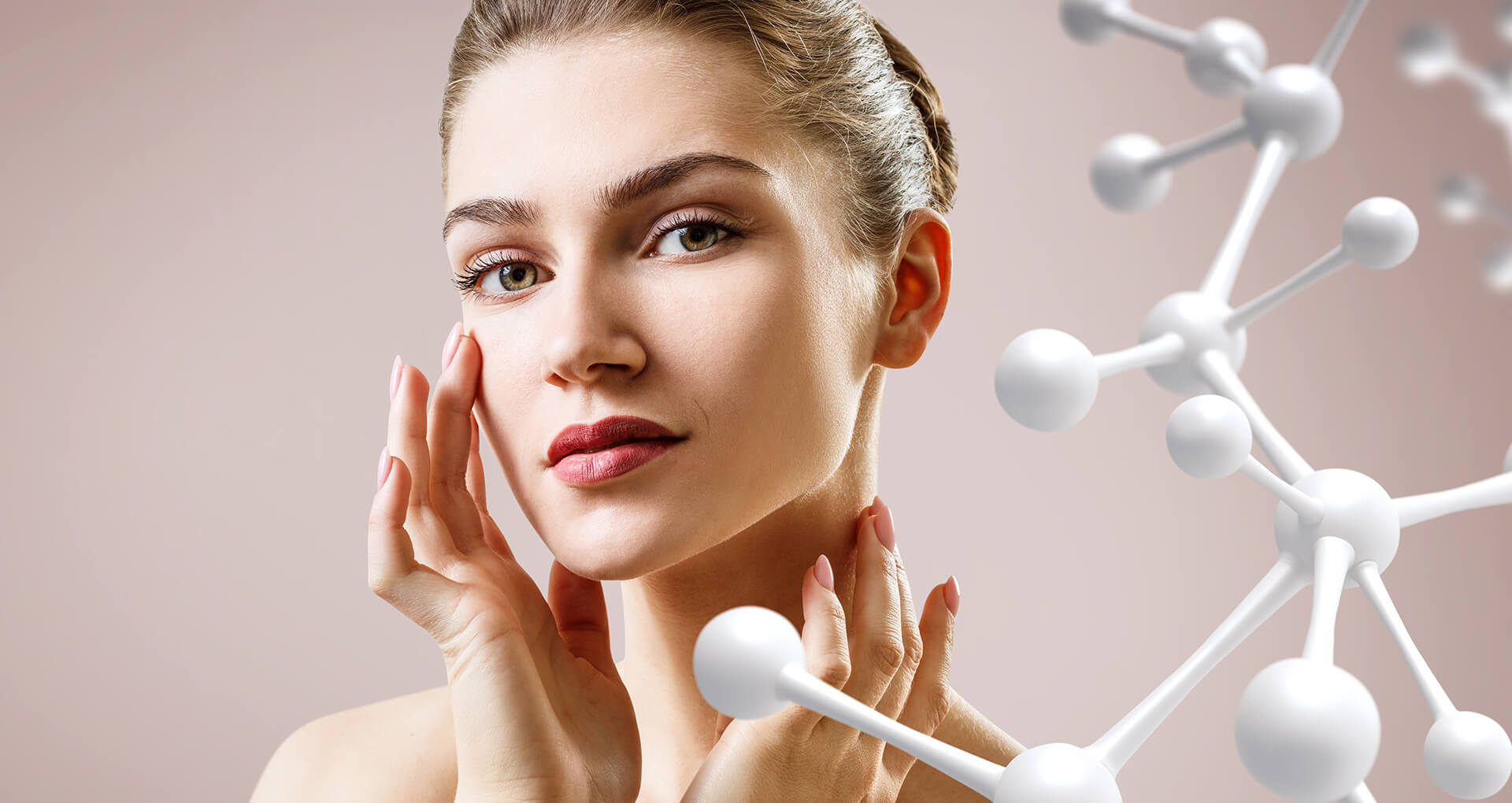 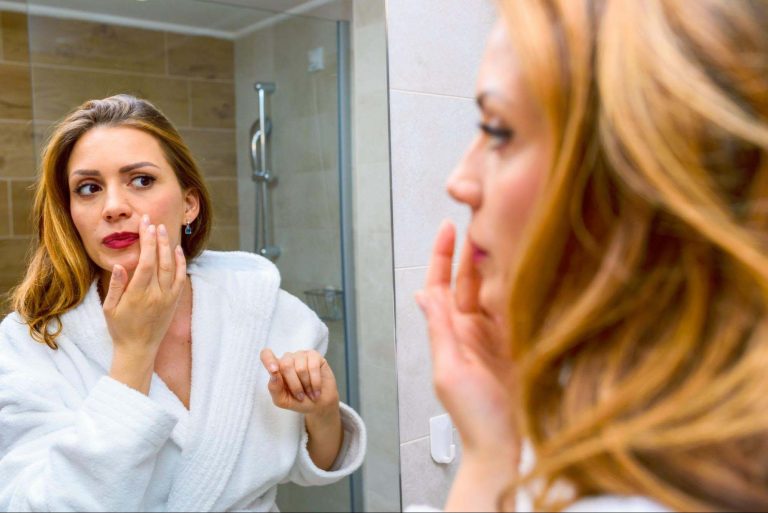 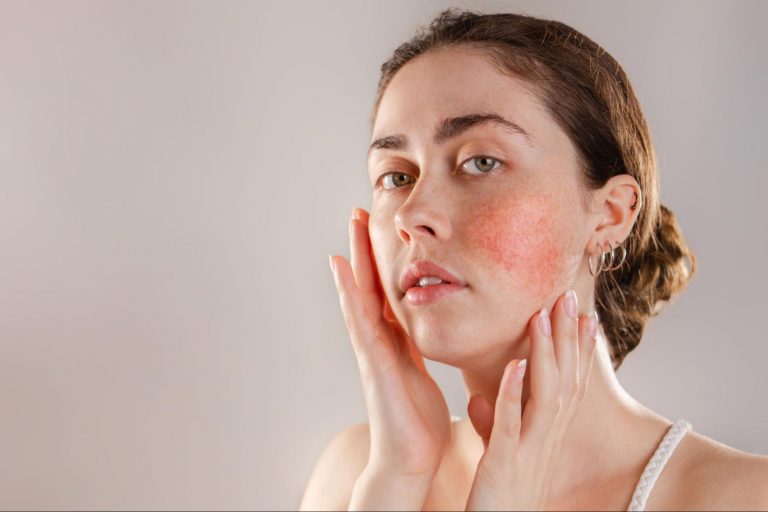 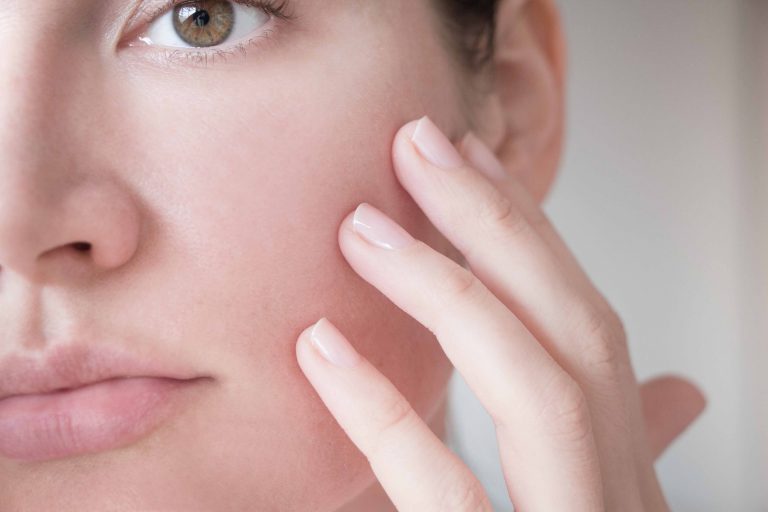 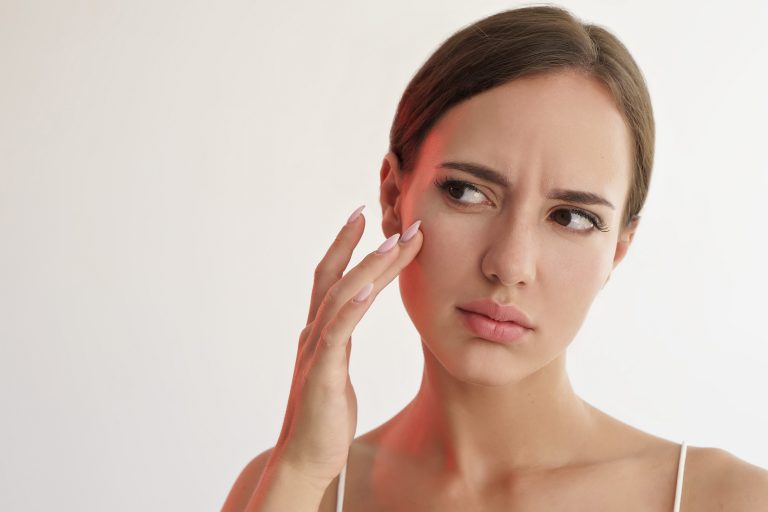 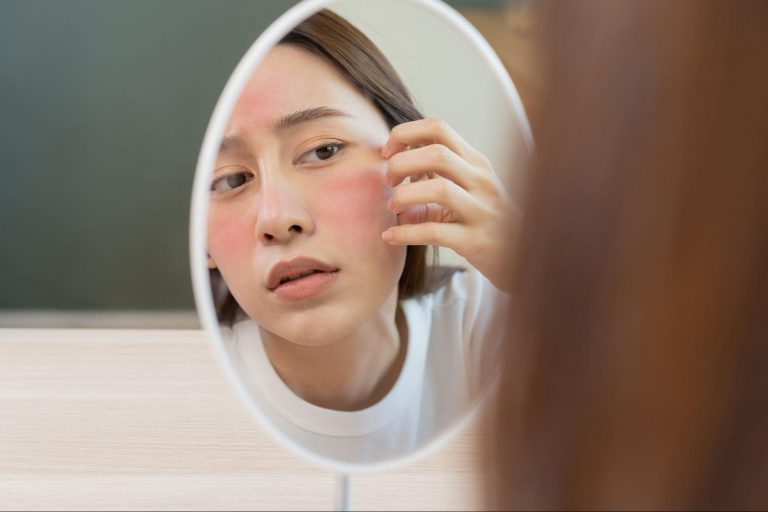 Dry skin is a very common issue in skin wellness; it’s dull, rough, inflamed, uneven tones, peeling, and feels tight and itchy. If you have dry skin, you may also be susceptible to other conditions including rosacea, sensitivity, hyperpigmentation, eczema, and fine lines and wrinkles. The best way to deal with dry skin is to provide hydration and then seal it in. Easier said than done, but read on to learn about the causes and steps to combat dryness.
read more...

Causes include climate fluctuation (like forced-air furnaces or low humidity), over-washing,
depleting the skin’s natural lipid layer, skin disorders (like eczema), inadequate protection from
environmental stressors, and harsh chemicals (like chlorine in a swimming pool).
Fortunately, we can adapt our skincare regime to combat dryness. Chemicals like hyaluronic
acid hydrate the skin by allowing water to bind to the collagen present in the skin. Quality
serums, creams, and oils can help rebuild and heal the skin’s lipid barrier to seal the moisture
within if used right after a gentle cleansing. Drinking plenty of water and eating nutrient rich
foods, especially vitamin b3 helps the skin. Lastly, avoiding products with alcohol, scents, dyes,
or harsh chemicals is critical.
Call your healthcare provider if:
You feel itchy without a visible rash
Dryness and itching are preventing you from sleeping
You have any open cuts or sores from scratching
Home care measures do not relieve your dryness and itching 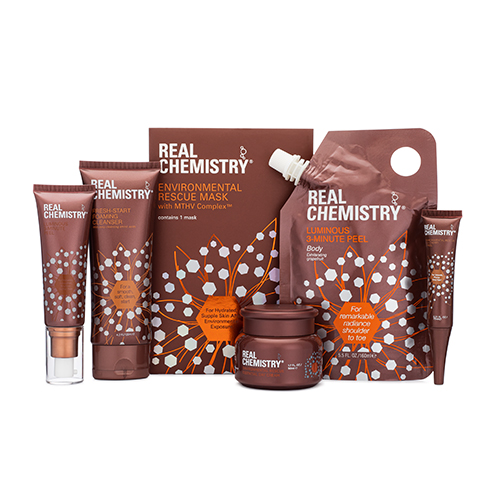 What Is Rosacea?
Rosacea is a chronic (long-term) disease that affects the skin and sometimes the eyes. The disorder is characterized by redness, pimples, and, in advanced stages, thickened skin. Rosacea usually affects the face. Skin on other parts of the upper body is only rarely involved.

Who Gets Rosacea?
Rosacea most often affects middle-age and older adults. It is more common in women (particularly during menopause) than men. Although rosacea can develop in people of any skin color, it tends to occur most frequently and is most apparent in people with fair skin.

What Does Rosacea Look Like?
There are several symptoms and conditions associated with rosacea. These include frequent flushing, vascular rosacea, inflammatory rosacea, and several other conditions involving the skin, eyes, and nose.

Frequent flushing of the center of the face, which may include the forehead, nose, cheeks, and chin, occurs in the earliest stage of rosacea. The flushing often is accompanied by a burning sensation, particularly when creams or cosmetics are applied to the face. Sometimes the face is swollen slightly.

A condition called vascular rosacea causes persistent flushing and redness. Blood vessels under the skin of the face may dilate (enlarge), showing through the skin as small red lines. This is called telangiectasia (tel-AN-je-ek-tay-ze-ah). The affected skin may be swollen slightly and feel warm.

In the most advanced stage of rosacea, the skin becomes a deep shade of red and inflammation of the eye is more apparent. Numerous telangiectases are often present, and nodules in the skin may become painful. A condition called rhinophyma also may develop in some men; it is rare in women. Rhinophyma is characterized by an enlarged, bulbous, and red nose resulting from enlargement of the sebaceous (oil-producing) glands beneath the surface of the skin on the nose. People who have rosacea also may develop a thickening of the skin on the forehead, chin, cheeks, or other areas.

How Is the Eye Affected?
In addition to skin problems, many people who have rosacea have eye problems caused by the condition. Typical symptoms include redness, dryness, itching, burning, tearing, and the sensation of having sand in the eye. The eyelids may become inflamed and swollen. Some people say their eyes are sensitive to light and their vision is blurred or otherwise impaired.
What Causes Rosacea?
Doctors do not know the exact cause of rosacea but believe that some people may inherit a tendency to develop the disorder. People who blush frequently may be more likely to develop rosacea. Some researchers believe that rosacea is a disorder where blood vessels dilate too easily, resulting in flushing and redness.

Factors that cause rosacea to flare up in one person may have no effect on another person. Although the following factors have not been well-researched, some people claim that one or more of them have aggravated their rosacea: heat (including hot baths), strenuous exercise, sunlight, wind, very cold temperatures, hot or spicy foods and drinks, alcohol consumption, menopause, emotional stress, long-term use of topical steroids on the face, and bacteria.

How Is Rosacea Treated?
Although there is no cure for rosacea, it can be treated and controlled. A dermatologist (a medical doctor who specializes in diseases of the skin) usually treats rosacea. The goals of treatment are to control the condition and improve the appearance of the patient’s skin. It may take several weeks or months of treatment before a person notices an improvement of the skin.
Some doctors will prescribe a topical antibiotic, which is applied directly to the affected skin. For people with more severe cases, doctors often prescribe an oral (taken by mouth) antibiotic. The papules and pustules symptomatic of rosacea may respond quickly to treatment, but the redness and flushing are less likely to improve. Recently, a topical gel was approved that can ease the redness associated with rosacea.

All medicines can have side effects. Some medicines and side effects are mentioned in this publication. Some side effects may be more severe than others. You should review the package insert that comes with your medicine and ask your health care provider or pharmacist if you have any questions about the possible side effects.

Some people who have rosacea become depressed by the changes in the appearance of their skin. People who have rosacea may experience low self-esteem, feel embarrassed by their appearance, and claim their social and professional interactions with others are adversely affected. A doctor should be consulted if a person feels unusually sad or has other symptoms of depression, such as loss of appetite or trouble concentrating.

Doctors usually treat the eye problems of rosacea with prescription eye medicine. People who develop infections of the eyelids must practice frequent eyelid hygiene. The doctor may recommend scrubbing the eyelids gently with diluted baby shampoo or an over-the-counter eyelid cleaner and applying warm (but not hot) compresses several times a day.

Electrosurgery, dermabrasion, and laser surgery may be used if red lines caused by dilated blood vessels appear in the skin or if skin thickening develops.

Working With Your Doctor to Manage Rosacea
The role you play in managing your rosacea is important. You can take several steps to keep rosacea under control:
Keep a written record of when flares occur. This may provide clues about what is irritating the skin.

Use sunscreen. Most people should use a sunscreen every day that protects against UVA and UVB rays (ultraviolet rays) and has a sun-protecting factor (SPF) of 15 or higher, but sunscreen is particularly important for people whose skin is irritated by exposure to the sun.

Use a mild lubricant if you find it is helpful, but avoid applying any irritating products to the face. Some people find that a green-tinted makeup effectively conceals skin redness.

If your eyes are affected, faithfully follow your doctor’s treatment plan and clean your eyelids as instructed.
Ask the doctor about the best options for you. A combination of treatments may work best.

Wrinkles are creases in the skin. They are also called rhytids.
Considerations Most wrinkles come from aging changes in skin. Many things in the environment will speed up the ageing process.

Stay out of the sun as much as possible to limit skin wrinkles. Wear hats and clothing that protect your skin and use sunscreen when you are outside. Avoid cigarette smoke.

When to Contact a Medical Professional
Wrinkles are not usually a cause for concern unless they occur at an early age. Talk to your health care provider if you think that your skin is getting wrinkled faster than normal at an early age. You may need to see a skin specialist (dermatologist) or plastic surgeon.

What to Expect at Your Office Visit
Your doctor will ask questions such as:

What is sensitive skin?
Many people say they have sensitive skin because of the way their skin reacts to skin care or other household products. Or they say they have it because even though they have no visible effects after contact with a product, it always makes their skin feel uncomfortable.
But here is what dermatologists look for when diagnosing sensitive skin:Skin reactions such as pustules, skin bumps, or skin erosion Very dry skin which doesn’t properly protect nerve endings in the skin A tendency toward blushing and skin flushing

Should men be concerned about sensitive skin?
Yes. The look of healthy skin is just as important for men as it is for women.

What are some tips for caring for my sensitive skin, especially on my face?
Cleansing. From one person to the next, sensitive skin responds differently to different cleansing methods. But most dermatologists agree that “deodorant” soap or highly fragranced soap contains strong detergents and shouldn’t be used on the face. Soap-free cleansers such as mild cleansing bars and sensitive-skin bars along with most liquid facial cleansers have less potential for facial skin irritation than soaps. The same is true for cleansing creams and disposable facial washcloths.

Hyperpigmentation is a common, usually harmless condition in which patches of skin become darker in color than the normal surrounding skin. This darkening occurs when an excess of melanin, the brown pigment that produces normal skin color, forms deposits in the skin. Hyperpigmentation can affect the skin color of people of any race. Age or “liver” spots are a common form of hyperpigmentation. They occur due to sun damage, and are referred to by doctors as solar lentigines. These small, darkened patches are usually found on the hands and face or other areas frequently exposed to the sun.
read more...

appearance to age spots but are larger areas of darkened skin that appear most often as a result of hormonal changes. Pregnancy, for example, can trigger overproduction of melanin that causes the “mask of pregnancy” on the face and darkened skin on the abdomen and other areas. Women who take birth control pills may also develop hyperpigmentation because their bodies undergo similar kind of hormonal changes that occur during pregnancy. If one is really bothered by the pigment, the birth control pills should be stopped. Changes in skin color can result from outside causes. For example, skin diseases such as acne may leave dark spots after the condition clears. Other causes of dark spots are injuries to the skin, including some surgeries. Freckles are small brown spots that can appear anywhere on the body, but are most common on the face and arms. Freckles are an inherited characteristic.

Freckles, age spots, and other darkened skin patches can become darker or more pronounced when skin is exposed to the sun. This happens because melanin absorbs the energy of the sun’s harmful ultraviolet rays in order to protect he skin from overexposure. The usual result of this process is skin tanning, which tends to darken areas that are already hyperpigmented. Wearing a sunscreen is a must. The sunscreen must be “broad spectrum” (i.e. it blocks both UVA and UVB). A single day of excess sun can undo months of treatment.